Our Amazing and Infinite Universe - The Hand of God

The Hand of God 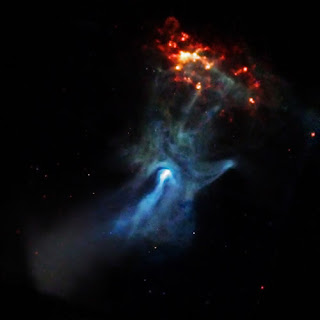 My brother James has gone through a spiritual journey over the past many years that have made me the recipient of many great emails. He sent the photo below after we were discussing God's design of our Universe. This photo was captured by NASA’s orbiting ‘Chandra’ X-Ray observatory. It is truly incredible...talk about "reaching for the stars." The magnitude and physics of the energy particles streaming from this pulsar are pretty amazing. The pulsar is the remnant of the Supernova B109 which was formed almost 2000 years ago when its massive star predecessor exploded roughly 17,000 light years from Earth. It is rotating seven times a second which has thrown particles across an expanse of 150 light-years! The star that collapsed was many times larger than our sun with the resulting pulsar that has a field 15 trillion times stronger than the Earth's magnetosphere.The rotation rate is what has created the nebula's finger shaped pillars transferring energy to the gas cloud nearby making it resemble a huge explosion in orange and red.


While doing a little research on this I also came across a Hubble photo taking in 04' of the Helix Nebula which definitely resembles an eye and has been dubbed "the eye of God". 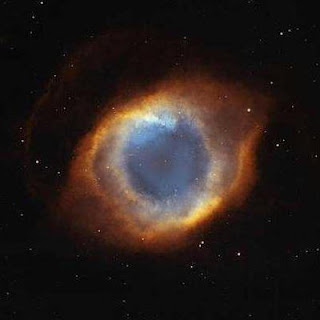 I also came across an article that discussed how primitive we are when looking at an image from the Cosmos such as this. The article discussed the fact that we "apes" interpret such awesome images as "divine" activity or God "tinkering" in the Universe in the name of searching for deity based meaning to our lives. My belief is that God doesn't tinker on any level but He certainly allows us the ability for independent thinking and free will.


Although I am a faith based, extremely spiritual but quite imperfect being...definitely a "work in progress", I am also a futurist along the lines of a Ray Kurzweil (with a fraction of his intellect, however) or Peter Theil. I have had several theological debates with clergy and theologians on "singularity" and God as I believe that science and our logarithmic acceleration of knowledge is all part of the "Plan". Over the weekend I was talking with a like minded friend of mine about the journey and about missing any of the incredibly exciting things happening all around us. We concluded that we, in the spirit of Kurzweil's book, what to "Live Long Enough to Live Forever". If we do through medical advancement and are able to eventually "transcend biology" eventually moving toward "the singularity" what does that mean? Well, most of my friends in the Church talk about being "one with God..." We all have our own individual interpretations of God as well. One things that seems consistent across all religions is that "God is everywhere" and in everything, right? Than the singularity (all things truly connected) means...? Yeah, usually leaves the theologians speechless... :-)

In any event, I find the science behind the natural beauty and mystery of our infinite Universe direct evidence of intelligent design. What we fail to grasp is the moment of creation ("the Big Bang") and the mathematical driven outcomes from the deliberate "randomness" due to the sheer scale of our Universe. It's absolutely incredible to ponder. I just don't understand why certain people are so bent on disproving the case for a creator. Einstein, Strobel, Hawking and many others had/have a very different perspective.
Posted by Unknown at 6:30 PM

I'm in agreement that science and spirituality are about to collide and see they are talking about the same thing just one has to 'prove' it. I'm not religious per se but I know when I look out into the stars at night - there has to be something bigger than the fragile human ego.

The greatest test of courage on earth is to bear defeat without losing heart.