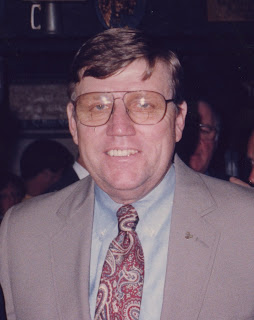 On Father’s Day morning, June 19th, 2011 just two days after his 74th birthday Thomas ‘Skip’ Lennon died unexpectedly. A memorial Service will be held at Holy Spirit Catholic Church in Sandy Springs on Thursday, June 30th, 2011 at 11:00 AM followed by a reception at the home of Barry and Libby Lennon.

Skip had been an Atlanta area resident since moving his family to East Cobb in 1974 and entering the Insurance industry as an executive with CIGNA. He and his wife Patsy have been living in Roswell for the past 12 years. Although his 40 year struggle with diabetes took its toll on Skip’s body, he always remained incredibly upbeat. He was always making friends and family laugh with a new joke or through his hilarious tales about the “Hoyas that never grew up…”

Skip grew up in Hot Springs, Virginia where his father was the President of The Homestead Resort. He was an incredible athlete playing baseball and basketball throughout his scholastic career. Skip was also a AA1 tennis player and scratch golfer winning multiple championships throughout his life. He attended Stanton Military Academy in Virginia and then went on Georgetown University where he received his B.A. in Accounting and became a CPA with Arthur Young & Company in Chicago., Illinois. After graduating from GU Skip entered the U.S. Army and was honorably discharged. In 1961, Skip then married his wife of 50 years Patricia Anne Boysen in Chicago, Illinois.

Skip remained very active with Georgetown as a member of the Athletic Board and as a member of the famous and beloved “Class of 59’”. Georgetown fostered lifelong friendships within that Class of 59’ that remain as impenetrable as Hoya Saxa (Georgetown’s cheer literally meaning “great rocks”). At Georgetown the key members/friends in the Class of 59’ each had nicknames…Skip’s was the “The Whale” which he is still answering to among his friends like “The Barrel”, “The Carrot “and “Schizo” who have also left us.

Skip was incredibly proud of his Irish heritage giving the Irish Blessing over his friends and family whenever he got the chance. He loved life and lived it to the fullest. He is preceded in death by his brother Patrick Lennon, Father Thomas J. Lennon and his mother Anne Lennon. He is survived by his wife Patricia Boysen Lennon, his sons Tom, Barry and James, his five grandchildren as well as his sisters Theresa Lennon Gardner and Kathleen Lennon Pampillonia and their children and grandchildren.
Posted by Unknown at 3:38 PM